Astronomical advances in fuel manifold testing and data connectivity technologies, which will enable NASA to take humans deeper into space than ever.

NASA’s next enterprise is to truly go where ‘no human has gone before’. The Exploration programme comprises a series of increasingly complex missions designed to lead the return of humans to the Moon, land people on Mars, and visit new destinations deep in the solar system.

Such stellar dreams have, not surprisingly, required innovation and expertise of galactic proportions.

Nowhere does this matter more than in the development of the ground-breaking - indeed space-breaking - manned spacecraft Orion, and the most powerful rocket to date: the Space Launch System (SLS).

That’s if the machines first survive the two-stage launch.

Stage one will involve SLS’s four RS-25 engines and two solid rocket boosters firing non-stop for eight minutes to deliver the 8.8 million pounds of thrust required to propel Orion into space. For stage two, an RL10 engine will have to power up from scratch, in freezing temperatures and no atmosphere, to speed Orion up to more than 24,000 miles per hour and push it towards the Moon. The level of vibration both systems will experience through these processes is to some extent unknown – but will be unprecedented.

Herein lies a mission-critical challenge. These engines have turbopumps that act like massive hearts, creating immense pressure that controls the flow of liquid hydrogen and liquid oxygen into the ‘belly’ of the engine: the combustion chamber.  And, just like a biological heart, it is vital that the arteries (fuel hoses) retain their integrity, so that the lifeblood (fuel) can flow consistently within them.

Although it had been planned for SLS and Orion to use stainless steel fuel manifolds already proven in near-space missions, NASA wanted to test them against new, exceptionally stringent specifications before venturing faster and deeper into the unknown.

Given the time and distance that Exploration crews will be away from Earth, the ambition is to make Orion the most ‘liveable’ spacecraft to date.  To support this, a highly sophisticated data network has been developed to drive many of its critical systems, including those supporting the life and comfort of its crew.

So far from home, failure of these systems will not be an option.

Here lay another major challenge. Traditional networks use ‘paired-connector’ technology that would not withstand the rigours and length of the planned missions. The extreme vibration would damage the points of contact, so they would be unlikely to last the duration of the flight.  The Exploration programme demanded a new type of connector.

Two Smiths divisions were recruited to help overcome these obstacles. They were both chosen for their technical innovation, their expertise and their project approach. 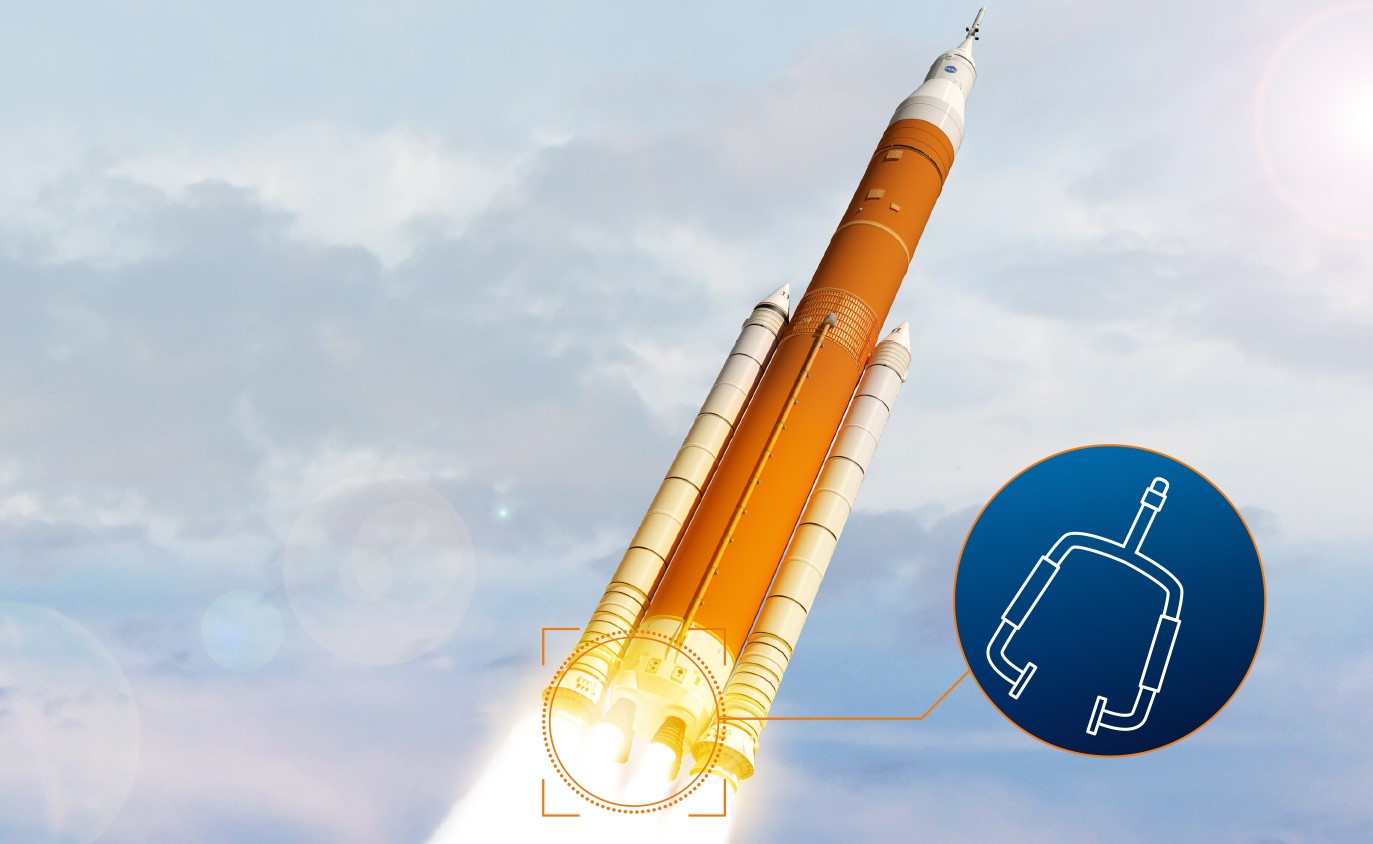 Firstly, Aerojet Rocketdyne, the RS-25 and RL10 engine prime contractor, chose Smiths Flex-Tek to manufacture steel fuel manifolds for its engines – in part because its Titeflex fuel manifolds already had an established pedigree in space. But, equally, because Smiths offered the unique ability to design tests of sufficient rigour, in the time available, for EM-1.

Scott Martineau, Vice President of Business Development and Marketing, Smiths Titeflex Aerospace, explains: “A number of manufacturers could make the metal hose in theory, but only Smiths has the experience and technical depth to advise - and test - how far we can push the design parameters without compromising the innate quality of the materials in deep-space conditions.”

For Orion, NASA is moving away from using separate series of data networks connected by bundles of wires to a master Ethernet network so that “anything can communicate with anything else at the lowest possible mass, with the fewest possible connections” says Clint Baggerman, Command and Data Handling system manager at Johnson Space Center.

Of five companies who responded to NASA’s call for submissions, Smiths Interconnect quickly pulled ahead of the rest thanks to its ruggedised D-sub miniature connectors, designed to withstand the high vibration and extreme temperature fluctuations faced in space.

The connectors make it possible for Orion’s data system to transmit more data than the network used in the Space Shuttle era while also eliminating extraneous signal noise.

Its ingenious shape (a basket of wires) means the socket points completely surround the length of the mating pin. This provides far greater contact surface than in traditional connector design, meaning there is less likelihood of contact failure even when the component is subject to extreme mechanical shock and vibration.

The design also gives the connector a self-cleaning wiping action. Along with oxide-free plating, this reduces the chance of connector degradation, helping to prolong its life. Such is the breakthrough of the Smiths design that its KA connectors can survive many times longer than comparable connectors without Hypertac technology.

Reassuring when you're exploring the unexplored.

Mr Martineau said, “For projects of such ambition, scale and significance as this, the innovative Smiths culture is as valuable to our customers as our know-how. Combined, our expertise, can-do attitude and our agility mean our customers trust us to safely push the boundaries of what’s possible and, in this case, help them bring the boundaries of the Universe a little closer.”