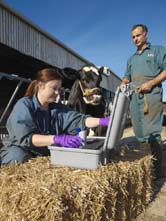 SMITHS Detection, part of the global technology business Smiths Group, today announces it is to launch a portable detection system that will enable veterinarians to carry out on-site diagnosis of animal diseases such as foot-and-mouth and avian flu.

This new technology means vets will be able to diagnose diseases in livestock and birds in the field in less than 90 minutes rather than having to send samples for laboratory analysis.

The initial focus of the technology will be on identifying foot-and-mouth disease and avian flu with a wide range of tests for other diseases to be made available after the initial systems are deployed.

Smiths Detection has been working with the global reference centre for foot-and-mouth disease – the Institute for Animal Health (IAH) – to develop and validate the system.

The new portable device is specifically designed to be used by vets wherever livestock are kept and comprises a simple-to-use sample preparation cartridge and a rugged portable instrument. The technology employed is a novel form of Polymerase Chain Reaction (PCR), a well established technique for the detection and analysis of infectious diseases.

Smiths Detection has been supplying field-based PCR systems for bioterrorism applications for many years. The new generation of instruments, building on this experience, is designed to run in harsh environments and, unlike typical laboratory PCR machines, requires no setting up by the operator between each test.

A wide variety of veterinary sample types can be analysed by the instrument and up to five independent tests can be run simultaneously.  An analysis of the infection is available in under 90 minutes, enabling the vet to take swift action. The instrument can be decontaminated at the location, a critical feature in the control of disease outbreaks.

For the last three years, Smiths Detection has worked closely with the laboratory of Professor Larry Wangh at Brandeis University, near Boston, Massachusetts, that invented a novel DNA amplification and analysis technique called Linear After The Exponential PCR (LATE PCR). Smiths holds an exclusive license to this technology. LATE PCR provides significant improvements over traditional PCR techniques, in particular in its ability to identify multiple types of bacteria or virus in a single test and to determine accurately the strain of an individual infection. This latter characteristic is critical in Avian Influenza where discrimination between the pathogenic strain of H5N1 and more common forms of the disease, is vital.

Dr Donald King, Group Leader of Molecular Characterisation and Diagnostics at the UK Institute for Animal Health (IAH), said: “Smiths Detection is actively collaborating with the Institute for Animal Health's global reference laboratory for foot-and-mouth disease to develop an assay to allow the rapid detection of FMD-infected animals in the field. This work has involved the development of a suitable assay format which will be validated when Smith's new platform technology is available in the near future. The results of this early pilot work have been presented at international conferences.”

Smiths Detection is working to develop additional assays for the same instrument, including one to detect the Blue Tongue virus.

Stephen Phipson, Group Managing Director of Smiths Detection, said: “Our links with some of the world’s leading academic institutions enhance Smiths Detection’s technologies and take us into new markets. This breakthrough with Brandeis University moves our biological detection and identification activities into an important commercial market. We are putting laboratory science into the hands of vets. Together we will play a vital role in the future detection and management of animal disease outbreaks.”

The new system will be launched to vets at the World Association of Veterinary Laboratory Diagnosticians conference in Australia in November 2007 and is expected to be in production in mid 2008.

Brandeis
Characterized by academic excellence since its founding in 1948, Brandeis is one of the country’s youngest private research universities and the only nonsectarian Jewish-sponsored college or university in the nation. Named for the late U.S. Supreme Court Justice Louis D. Brandeis, Brandeis combines the faculty and resources of a world-class research institution with the intimacy and personal attention of a small liberal arts college.